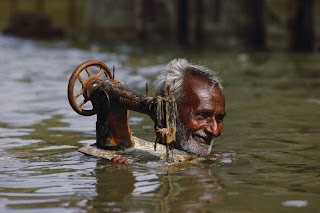 WE – “Let’s go to the temple..Lord Ganesha is accepting the offerings of milk! Isn’t that a miracle!”
THEY – “oh c’mmon! It is possible that a political party is behind this. A similar strategy was used to propagate religion in the past. People are swayed, but only for a while. This will not last n blah blah blah….”

WE – Our life is a miracle! God is great!


THEY – Hello! Our life is the result of bio-chemical reactions n blah blah blah…

Ok. Enough. Now it’s time, we answer and they listen. Why is it so important for them, “the rationalists”, to interfere with our FAITH? Yes our FAITH. It’s what they call a false claim, superstition or whatever! But for us it’s the moment of fun. It’s what twinkles our eyes and boosts our imagination. It is what strengthens our FAITH in God. We feel better.

The temple of Deshnoke dedicated to 15th century Mystic Karniji, who is worshiped as an incarnation of Goddess Durga, promises to fulfill the dreams of many of its devotees, who drink the same milk which is drunk by the swarm of rats in the temple. We say the white rats are the reincarnation of saints and the water and milk drunk by these rats are medicines. They say, it’s unhygienic and highly questionable. In spite of hundreds visiting the temple daily, their face still frowns.

They have a scientific, political or any other rational reason to it but that’s about it. Why kill the blind faith of others if it’s not harming nyone. They know it’s not a miracle? Cool. They know the reason behind it? Supercool. But why spoil the ecstasy the others get by this apparent miracle?

The moment we start relishing these miracles, these rationalists form a panel on the news channels to weed out the irrationality and sow the seeds of scientific reasoning. And the few moments that we get to enjoy the miracle, forgetting about the bullying in office or nagging of our partners, we are told that it wasn’t a miracle at all! How rude!

We know these are illusions. But we cherish these illusions. Then again, if these illusions are in no way causing any harm, on the contrary only giving wings to our faith, why then to puncture them? Why to become earnest killjoys in the way of these cherished illusions? If we want to love our Gods and have a blind faith in Him then such a faith should be appreciated and should remain blind.
I am in no way promoting superstition. All I want to say is that I know it is very important to seek knowledge coz that is how we'll progress and ignorance is not always a bliss. But sometimes it is. Sometimes it gives pleasure to move off the track of rationality. It's a blissful state when we see something as a miracle. When we come to know the reason behind it, it breaks our illusion and we start seeing the thing as just another complexity, which can be scrutinised by science.
Science has an answer to every question. Maybe. But then in spite of having all the answers known and experienced, don’t you still feel that life is a miracle and FAITH still works?

Just keep the faith and everything will work out fine.

My mother was not lierate.But she has faith on God.Always she used to sing for Him,eat for Him,used to talk to Him about her problems just we talk with our family.Due to her faith she could bear curse of poverty,faced all problems boldly and educated all family youngsters.Today it is her Faith that we all family members are in good shape!

It is the story with all families who survived due to faith on Him.

I think if you miss faith,you die.

i salute the great lady for her faith and dedication towards her family and for raising her kids to become capable of walking tall in the society..i am proud of her..:)

Hello Sneha,
ur depiction is really good(though cannt understand those other words...must b hindi/gujrathi,pardon me 4 my poor knowledge)

do drop a mail @drewssheril(google mail)

i've always been a believer and i've personally enjoyed my communication with God through faith. i had this silly habit of tying a wish-chit with a baloon and flying it up in the sky, to God..or simply writing a letter to God and putting it below the pillow..scientifically all this is illogical..but i've cherished this childhood belief all these years..

Hi there, You've done an incredible job. I'll certainly digg it and
personzlly suggest to my friends. I'm sure they will be
beneftited from this site.